Jordan Szoke spends nearly every waking moment on two wheels - he may even sleep that way.  Szoke is a dominating force in the world of motorcycle racing.
Canadian Cycling Magazine ~ 2011

Not only is motorcycle racing successful for Jordan his other passion for Observed Trials lead to a Canadian National Championship in 09-10-12-13.

His impressive skill and amicable attitude secured him a spot on Team Canada in the Trials De Nations World Event for 12 years running.

Szoke’s first venture at operating his own team in 2010 was also tremendously successful as he earned the acclaimed “Team of the Year” award.

Szoke may be the only Canadian racer to win two championships in two distinctly different, nationally recognized disciplines.  He also accomplished the double-championship feat in 2009 and 2010. He's had a successful season in bicycle competition, too, showing he's still at the top of his game and has the true heart of a champ.
Inside Motorcycles ~2013

At home and abroad Jordan’s triumphs has lead to working and racing with such prestigious factory racing teams such as Kawasaki, Suzuki, Honda, Harley Davidson and Ducati.

Outside Canadian borders, roadracing prosperity followed Jordan.  In 2007 Jordan was invited to Valencia Spain to participate in the annual press day at the final round of the Moto GP championship aboard a Factory Kawasaki.

In 2008 Jordan’s long time sponsor and major helmet manufacturer released a Jordan Szoke replica helmet for sale to the public with major success.

Jordan was recognized by our Member of Parliament for his outstanding professional achievements.  He has been extended an invitation to meet our own Canadian Prime Minister.  Jordan has been inducted into the Brantford Hall of Fame, recognized by City Hall and earned Athlete of the Year.

Jordan delivers massive media presence to his sponsors due to his dominating results and well mannered demeanor. Jordan has been spotlighted during national broadcast news channels (A-Channel, Global and CBC) representing his sport and athleticism.  He has also been featured on A-Channel as the Athlete of the Week.

He was also recognized on North American Broadcast TSN and Speedvision, shaving his head in support of the military troops at Mid Ohio Sports Car Course.  Jordan is also featured on many web-based TV programs like Auto 123 and On The Throttle TV.

His talent in all things motorsports is undeniable and his presence is sure to attract public attention.

Jordan has expanded his interests in all things motorsports by creating his own video production company showcasing his first video “LIFE101” in 2009.

“I am totally exhausted.” says Szoke “What a season, I dedicated myself to do something pretty special for our fans and sponsors and it feels incredible to have accomplished just that.”
Jordan Szoke ~2013

He is also known for his off the track charity work competing annually in the Wayne Gretzky Celebrity Golf Tournament.  He was recognized for his achievements by receiving the prestigious Award of Merit from the foundation.   Jordan also endorses a program Racing for a Cure that accumulates funds for the Princess Margaret Foundation for cancer research.

“This sport is coveted as an individual sport, but you cannot win something like this on your own.  You have an entire crew behind you that provides you with a safe motorcycle that you can win on and an atmosphere to feel comfortable in.”
Jordan Szoke~ 2012

“There are a lot of awards you hope or expect to receive in your sport, but the Award of Merit is pretty special.  it gives me gratification for what I’ve accomplished in life both in and out of sport.”
Jordan Szoke ~ 2008

career started as the youngest roadracer to earn his professional license, at the age of 15. Jordan showcased his raw talent consistently landing him on the podium.  Shattering track records and earning championships gained him some deserved notoriety.  Winning his very first National Championship at the age of 16, only two short seasons after entering competition, it was clear that this was exactly what Jordan was born to do. 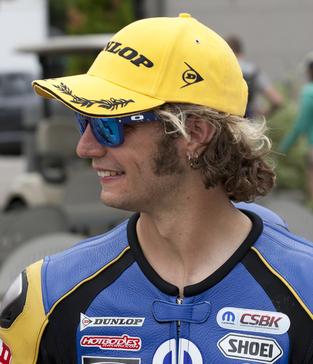